Get started with our API design tools, then connect your Git repositories to gain visibility into all the elements of your API program.

What is OpenAPI? The OpenAPI Specification (OAS API) is a widely adopted, standardized format for describing REST APIs. You can use OpenAPI to detail every part of your API, including endpoints, operation parameters, request responses, and authentication flows. The OpenAPI format is easy for both developers and machines to read and understand. What’s harder to immediately decipher is how the versions differ.

At the time of publication, almost everyone will likely want to use OpenAPI v3.0, the latest official major version that was released in 2017.

Some folks are on OpenAPI 2.0 due to being stuck there with tooling that still has not added support for OpenAPI v3.0. Some people might talk about OpenAPI v3.1, but whilst it is still in the “Release Candidate” stage there is essentially no tooling support for it.

However, for those digging into the nuances between versions, it’s worth looking into the details.

There are currently two major OpenAPI releases, 2.0 and 3.0 (the latest release is 3.0.3). Version 3.1 was announced on June 18, 2020, as an initial release candidate. While it takes some important steps forward, it adds to the confusion over which version to use. In this post, we’ll look at some of the key differences between OpenAPI 2.0, 3.0, and 3.1.

Differences Between OpenAPI 2.0 and 3.0

The two major versions of OpenAPI have the most significant differences, which come from their history. OpenAPI 2.0 was previously known as Swagger and is intended to replace it with backward compatibility. Once adopted as an open format, the community began working on OpenAPI 3.0, released in 2017. Let’s highlight some of the significant changes made to OpenAPI components in version 3.0. 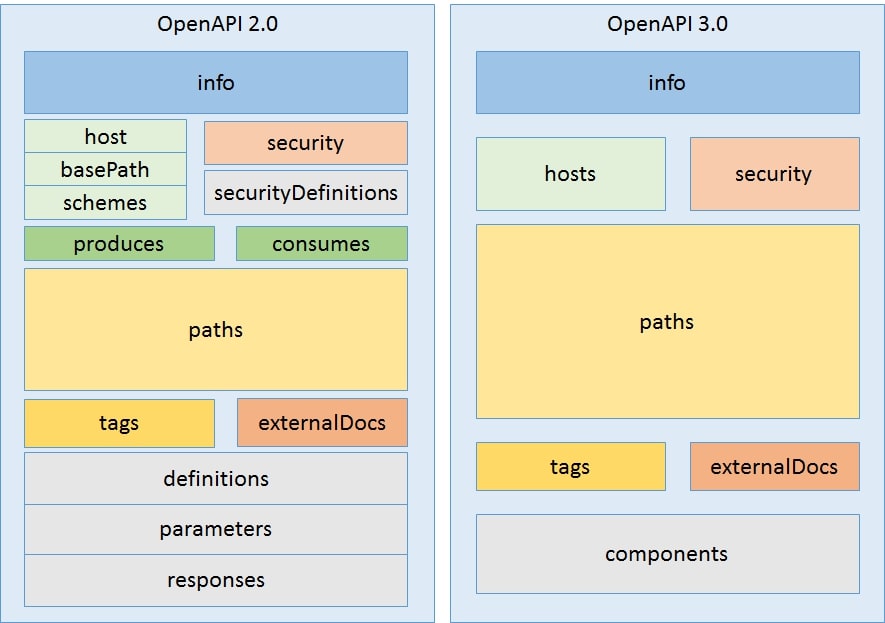 Version 3.0 includes the new Components Object, which contains reusable objects, such as examples, parameters, responses, request bodies, links, security schemes, and schema descriptions. The Components Object also contains headers and callbacks. In version 2.0, you could describe headers but couldn’t reuse them as easily as in version 3.0. Support for describing callbacks is a new feature in version 3.0, which we cover later in this section.

The 3.0 release includes extended support for JSON Schema, which means you can use more JSON Schema keywords than with version 2.0. Some keywords supported in version 3.0 are handled slightly differently than in JSON Schema, including:

OpenAPI 2.0 does not support the oneOf or anyOf keywords, but you can use these keywords with version 3.0. For example, you might want to use oneOf or anyOf to describe an API request or response with a few OpenAPI alternative schemas (built on the concept of polymorphism).

Examples are a handy OpenAPI feature you can use for a wide range of purposes. For instance, you could create a mock API server tool that uses examples to generate mock requests. In version 3.0, examples have been completely overhauled so that you can easily reuse them.

In previous versions, you could only describe examples using a JSON or YAML object. With version 3.0, you can describe multiple examples of any format using a JSON string. Also, examples can be placed within objects, properties, parameter descriptions, request bodies, and response descriptions. You can also now reference external examples.

OpenAPI 3.0 supports more security schemes and bearer formats than version 2.0. Plus, the way you describe security flows has changed. Version 3.0 includes a new http type, which covers all HTTP security schemes. Additionally, the basic type has been renamed to http.

Support for OpenID Connect Discovery was added to the specification in the 3.0 release, and the type is openIdConnect.

Version 3.0 includes improvements to parameter descriptions. The body and formData parameter types have been removed and replaced with requestBody. The specification supports arrays and objects in operation parameters, and you can specify the method of serialization. Operation parameters include path, query, header, and cookie.

A new cookie parameter type was added in version 3.0 so that you could describe APIs that use cookies. Cookie authentication is not supported in version 2.0, so you have to find workarounds for the limitation, usually through request header objects. With OpenAPI 3.0, you can send API keys via cookie, although this is not a best practice. You have better options for transmitting API keys, such as authentication with API tokens and OAuth.

The 3.0 release features a requestBody that supports content negotiation so that you can define different schemas and examples for various media types. The requestBody allows web services to accept and return data in different formats, such as images, plain text, XML, and JSON. It also allows you to provide one or multiple examples.

In OpenAPI 2.0, mimetypes supported by the API are defined in the “consumes” and “produces” sections. Consumes and produces have been eliminated in version 3.0. They’ve been replaced by a content object that maps the supported media types to their schemas. In OpenAPI 3.0, you can use wildcards for media types. For example, you could apply a wildcard that represents all image types: image/*

Callbacks allow you to describe asynchronous APIs where communication happens in real-time. An example of callbacks in real-life would be shipment alerts—when you’ve subscribed to receive alerts about a package shipped by a logistics company. You get notifications in real-time from the logistics API informing you “the package is in transit” or “the package has been delivered.”

Links are another new feature in version 3.0. With Links, you can describe the relationships between API responses and operations, and then provide a traversal mechanism between them. Links allow you to define what will happen next with each API endpoint. The concept of Links is similar to hypermedia APIs (HATEOAS). However, this feature was not explicitly created for describing hypermedia APIs.

One way you could use Links would be to describe API endpoints that retrieve product details for different productIDs. For each productID, you would use Links to describe how to expand the information, and clients could follow each link automatically. You could also use Links for pagination. For example, if you are designing an API that will retrieve an extensive list of products, you would want a way to paginate the list automatically. You could use Links to explain how to navigate the page results, e.g. 50-99, 100-149.

Differences Between OpenAPI 3.0 and 3.1

Moving from the legacy Swagger description format of OpenAPI 2.0 to 3.0 obviously brought sweeping changes. While OpenAPI 3.1 is considered a minor release, there are some significant differences between version 3.1 and 3.0, especially related to JSON Schema in OpenAPI.

The changes were big enough that the community debated whether to refer to this release candidate as OpenAPI 4.0. In this section, we’ll highlight some of the differences in what will become OpenAPI 3.1.

Version 3.1 is 100% compatible with the latest draft of JSON Schema, version 2019-09. OpenAPI 3.1 supports ALL JSON Schema Keywords, so if the keyword exists in the JSON Schema vocabulary, then you can use it with OpenAPI 3.1. The move to full JSON Schema support has created some minor breaking changes.

Semantic versioning (semver) was introduced in OpenAPI 3.0. The goal of semver is to communicate when API updates include breaking changes and when updates are backward compatible. Because of the minor breaking changes in version 3.1, there was some debate among the members of the OpenAPI Technical Steering Committee (TSC) about the continued use of semver. Continuing to use semver would require that the next OpenAPI release number be 4.0.0 instead of 3.1. So, in the end, the TSC decided to drop semver.

Paths are resources that an API exposes. They include relative endpoints, operations, and responses. In 3.1, paths became optional to allow API descriptions that only include webhooks. The change allows for flexibility, which fits OpenAPI’s goal to define any REST API. This feature builds on the callback support of OpenAPI 3.0, which helped describe event-driven APIs. Most OpenAPI files will still have paths, but now they won’t be required.

Single “Example” Keyword Has Been Deprecated

The single example keyword has been deprecated in OpenAPI 3.1. This change resolves a discrepancy between OpenAPI and JSON Schema. JSON Schema includes an examples keyword which is an array, so you can list examples as a string:

OpenAPI 3.0 does allow you to add an “example” to an array. But arrays and items with arrays don’t support multiple examples; they only support the single example keyword.

Type Can Now Be An Array

In previous versions of OpenAPI, type could only be a single string. But in JSON Schema, type can be an array of strings. There is no workaround for this in version 2.0, but in version 3.0, you can select multiple types using oneOf:

With OpenAPI 3.1, the specification now supports type as an array:

Nullable is No More

Neither OpenAPI 2.0 nor 3.0 support null as a type, but JSON Schema does support type null. OpenAPI 3.0 includes the field name nullable, which you can set to true if you want the value to be null:

However, support for type null has been added in version 3.1, and nullable has been removed.

One Platform to Explore OpenAPI

We’ve only scratched the surface of the differences between OpenAPI versions 2.0, 3.0, and 3.1. You can use Stoplight to build quality APIs faster, without remembering the OpenAPI format details. Get started with our API design tools, then connect your Git repositories to gain visibility into all the elements of your API program.

This is the latest in our Public Style Guides template offerings, available in Stoplight Platform or our open-source too...

Should I Use a Unified API Approach?

Subscribe to our podcast, API Intersection, for more insights.

This is the latest Public Style Guides template available now in Stoplight Platform and in our open-source linting tool,...