You Made an API, Now Let's Talk Adoption Strategy

Nearly 90% of developers are using APIs, and the global developer community is rapidly expanding. In fact, the number of third-party APIs used in applications is expected to triple by 2025 (Gartner). According to RapidAPI, API adoption rates of those APIS are on the rise across all industries as well. However, adoption is often the trickiest part of the API lifecycle; lack of adoption is where many APIs go to die.

In our latest podcast episode, we spoke with Keith Casey, Head of Go-to-Market and Product Strategy at Ngrok and Principal at CaseySoftware LLC. As an API expert with more than twenty years of experience, Casey's on a mission now to help others create and consume amazing APIs.  Casey's recent blog post on API adoption and the pitfalls that come with it sparked my interest, so I invited him onto the API Intersection podcast to talk about it

"Over the last 15 years of working with APIs, I've seen hundreds of companies launch APIs successfully and never actually get people to use them," shares Casey.

Casey explains how in the ideal world, users find an API, integrate it, and launch it (easy, right?). But often, API usage really follows a counter-intuitive pattern. This pattern follows three stages that Casey outlines as exploration, integration, and adoption in his piece API Adoption: The Dangerous Delay.

How to Measure and Assess API Adoption

Measuring adoption rates by looking at the number of API Calls is often the default and a baseline starting point. Still, it's not a great measure of true API adoption, and tracking the number of calls won't lead to the expected growth and the patterns you want to see. So how do we tackle finding the right metrics?

"So at that point, it takes a lot of one-on-one conversations to get started with it. I follow pretty much a product marketing mindset of sitting down, understanding users' use cases, understanding their expectations, how we're positioning the API, figuring out which of the API calls are actually generating value for them," shares Casey.

Understanding the views of the user base and which API calls are valuable can help with assessing adoption rates. Prioritize the valuable ones, and work with a handful of early customers to determine their needs, wants, and aspirations. Then, use that data to modify your APIs for your target prospects as you grow your user base.

Another thing to watch out for as you monitor API adoption is what can be considered the single most precarious moment in the cycle, the Dangerous Delay.

The Single Most Dangerous Moment for an API Company

When it comes to the adoption of your API, what Casey calls the "Dangerous Delay" can be the most challenging moment for a new API company is this time period because it means the difference between "your API hasn't been adopted yet" and "oh no, it's never going to be adopted," and that can't be known until after the Dangerous Delay period wraps up. 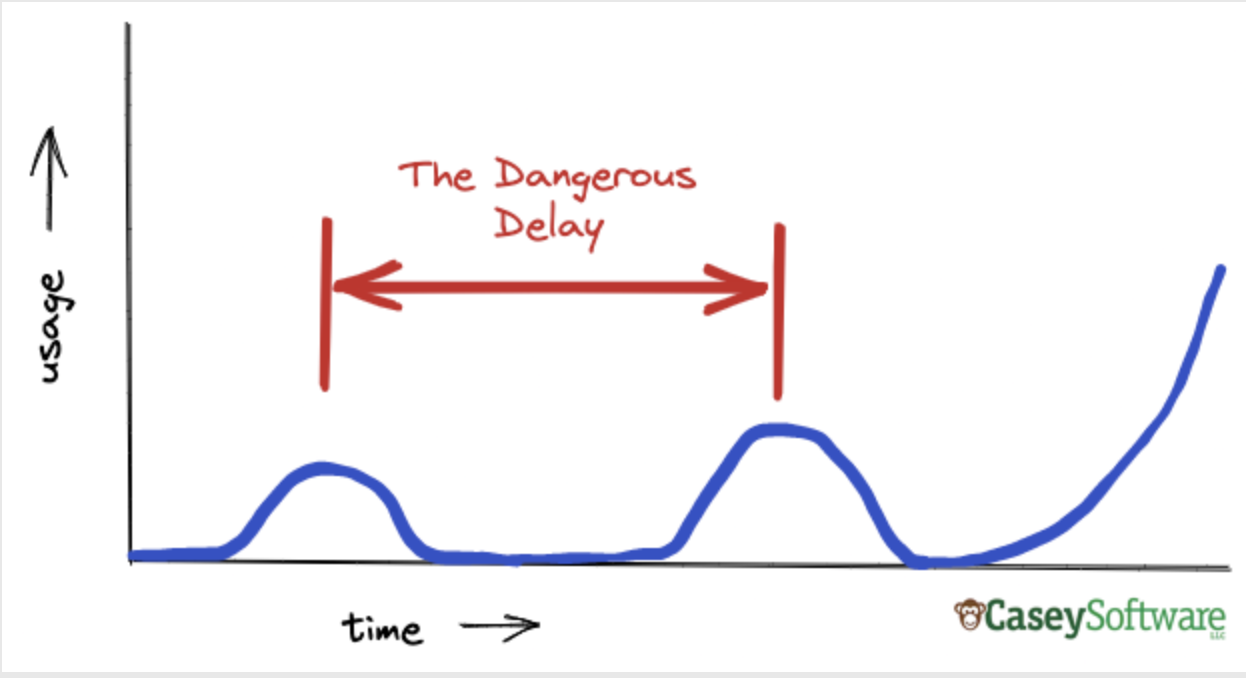 There are two bumps in usage that happen over this time to keep in mind. The first bump is that initial usage which is where first-time exploration happens with your new API. This is often a quick, specific exploration period of testing the waters, and it's expected that usage drops to zero immediately after the first exploration because they aren't yet looking to integrate anything.

Next in the timeline, Casey explains that a second bump is usually larger than the first because a requirement drives it.

"This is where a product manager comes and says, 'hey, that thing we talked about six months ago. We need that now. That thing that we are worried about has reached the top of the priority queue. Get on it, please.' Then the developer starts building it," shares Casey.

During the second usage period, usage goes up, testing increases, and serious development is underway. Then once again, without exception, usage after that goes back to zero until they're ready to integrate it fully. The vital thing to monitor during the dangerous delay period is that you're listening to early adopters' feedback, implementing it, and assessing to see if they return for that second usage bump.

In the end, I expect we will see an increase in attention paid to adoption strategies, assessment, and improvement this new year. 2021 was the year of creating APIs, so I imagine 2022 will be the year of ensuring they're adequately adopted. For more insights and tips from industry experts, visit our API Intersection podcast or check out Keith Casey's blog.

Dark & Light Magic of APIs: The Consumption Side of API Programs

In our latest podcast episode, we spoke with Lorinda Brandon, VP of Engineering at BetterCloud. At BetterCloud, their co...

Ford's 5 Steps to Navigating the Digital Transformation Frontier Via APIs

The wave of APIs taking over the world manifests not only in new companies springing up that are absolutely reliant on A...

Freemium Models & Partnerships: What to Consider When Launching a New API Company

In our latest podcast episode, we spoke with T Antonio, Senior API Sales Manager at Mapbox. Previously, T's had experien...