We’ve just released a new version of Stoplight Studio Desktop, our standalone application for Windows/macOS/Linux, which allows you to manage OpenAPI, JSON Schema, AsyncAPI, and Markdown documents locally. Studio Desktop v2.1.0 comes with a few new features we’d like to show off.

Have you ever looked at an API response or some other chunk of JSON and wished you could automagically create an OpenAPI / JSON Schema model from it? Now you can! 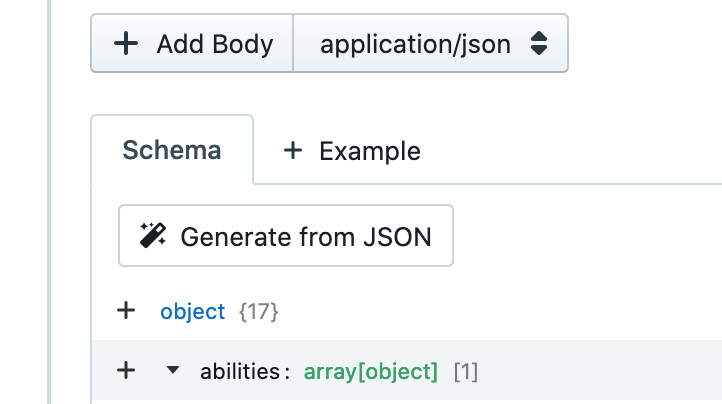 Stoplight Studio will take a look at each of the properties in that JSON, see what data is there, and make the most accurate model it can. It mostly looks out for properties, basic data types, and lets you decide what other validations can be applied later. This feature will hopefully save your keyboard from a bunch of distress.

Why would you need to do this? Maybe you made the API already, and now you’re trying to document it. Or you’re one of the thousands of API developers who used to be entirely code-first but are now migrating from a code-first workflow to a design-first workflow.

Documentation hosted on Stoplight has a default table of contents created for it, but if you want more power, you can replace that with an entirely custom one!

Learn more about custom Table of Contents in our documentation.

Our engineers have been hard at work, benchmarking and debugging various parts of our codebase and making code contributions to the various open-source tools we rely upon, all with the goal of making Studio perform faster and use less memory. There are too many tweaks to get into here, but things should feel smoother while you’re editing large API descriptions.

JSON is easily the most commonly used data format for Web APIs, but sometimes plain-text, CSV, and other text-based formats are used too. In Studio v2.1.0, we make it possible for any response mime type to contain examples.

This is the first of a few changes to expand our tooling beyond a focus on JSON. We’ll soon be rolling out some impressive changes to documentation and the preview panel, which will make things work and look better for APIs that do not use JSON or have a mixture of mime types.

Curious about what features we’re considering, currently developing, and recent releases? Check out our public roadmap to submit your ideas, and vote on what we should build next!

Stoplight Docs just got a whole lot better, and you don't have to change a thing to enjoy it. We've refreshed the entire...

Sometimes you just need to take a step back and reflect.

Ask 100 developers where a semicolon should go, and you'll either get 100 answers or an all-out fistfight. To save this ...